Royal Flush is unusual in several ways. It owes its existence to two companies, Rich Seam Theatre and Harrogate Theatre, yet is essentially the work of only two men, writer Nick Lane and actor Matthew Booth, who, I gather, shared the direction between them. Also it is not one play, but two, different in tone and historical setting, but with all kinds of elements in common: Thomas Crapper, flush toilets, royal personages, attitudes to the old and the poor, the town of Thorne, even Frankenstein. It is also unusual in that Messrs. Lane and Booth welcomed reviewers in for its very first appearance before an audience. Perhaps it could take a touch of pruning, but Matthew Booth commands his material with remarkable control for well over 2 hours of stage time. In the first play the eminent innovator in bathroom plumbing, Thomas Crapper, born in Thorne, near Doncaster, looks back over his life from 1882 when he is about to install his new improved toilets for the Royal Family at Sandringham. Nick Lane uses the workable pretext of a letter he is writing to a woman he briefly loved when they were young. The play is a nice mix of historical fact, imaginative characterisation and humorous invention. The interval moves us forward 130 years to an old people’s home in Thorne and a 40-year-old toilet cleaner whose selfishness has somehow never brought him any rewards. His secret scam to take advantage of a royal visit leads to an ingeniously farcical plot, a suitably daft comment on the more serious comedy of the first half. The simple sets work well enough and the limited use of sound and lighting effects is always well handled, but this is mainly about words – and, in a long tour of one- and two-nighters mostly in Yorkshire, Royal Flush should be impervious to the conflicting demands of different settings. Nick Lane’s script changes gear neatly between the plays, as does Matthew Booth’s acting: apart from successfully projecting a very different protagonist, he varies style for the other characters in the narrative, broadening into comic caricature in the second half.

Beautiful and tenderly written Yorkshire Post – Me and Me Dad 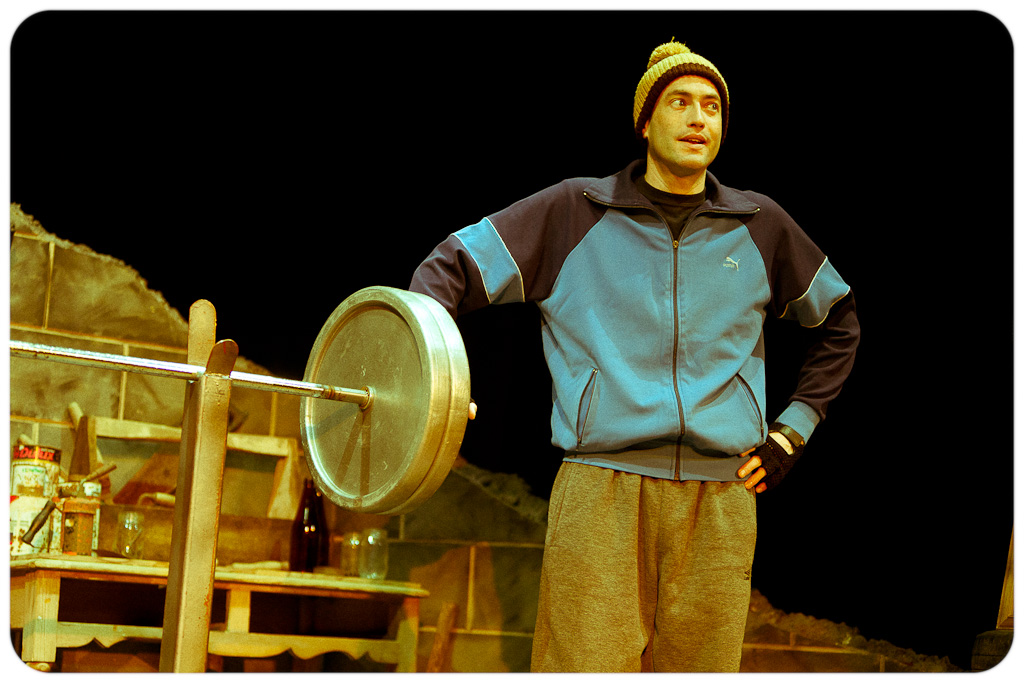 In 2011, after touring for years as part of Northern Broadsides and Hull Truck, Matt decided he fancied doing something different. Not the play – he’d performed Beef before (two years earlier, in fact, when Hull Truck toured it); more that he wanted to try making work, promoting and touring it himself. He asked John whether he could take it out again, John agreed, and that was it – Rich Seam Theatre Company was born.

The original marketing copy for BEEF:
Dave Cookson was a nobody. Tormented by schoolyard bullies, ignored by the girl he loves, ridiculed and laughed at by everyone else. His only escape was the homemade gym in his dad’s garage where he could try to get the physique of his bodybuilding idol Arnold Schwarzenegger. Trouble is, although he’s got the weights and the gear, his muscle fantasy is just a weedy dream. Unable to do anything about it he’s struggling to lift his spirits, let alone a dumbbell.
But then Dave’s life is changed forever. Now he’s 17 stone of rippling muscle, ready to take control of his destiny and shift the power in his favour to get revenge. But it’s not only Dave’s body that’s changed; so has his mind… and he’s struggling to control both.
Nick had directed the previous production and came on board again to help get the play back into shape. The stripped-down production toured extensively and garnered a great deal of praise from theatres and audiences alike:

Under Nick Lane’s direction, performer Matthew Booth invests the character of Dave with great credibility, bringing out the humour and ultimately the pathos in Godber’s introspective play Western Morning News

Matthew Booth superbly portrays the multifaceted personality of Dave and manages to take the audience on the rollercoaster journey of Dave’s conflicting emotions. Preston Evening Post