Rich Seam Theatre Company were formed in 2011, from an idea to make great work that appeals to everyone. What we mean by this is that yes, we hope to encourage regular theatregoers to the plays that we put on – they’re the backbone of any company’s audience – but we really want to expand upon that base by offering work that sparks an interest in those people who wouldn’t normally consider theatre “for them.” We want to reflect the communities we live in, discover the stories within those communities and bring them to life. Theatre is at its best when it speaks in a language people hear every day about the things we care about, using characters that could live next door to any one of us.

Why Rich Seam? Well, aside from the idea about mining a rich seam of talent, we both come from mining areas and share a down-to-earth, no-nonsense approach to the plays we put on. We’re honest, hard-working and we want to give you a night you won’t forget in a hurry. 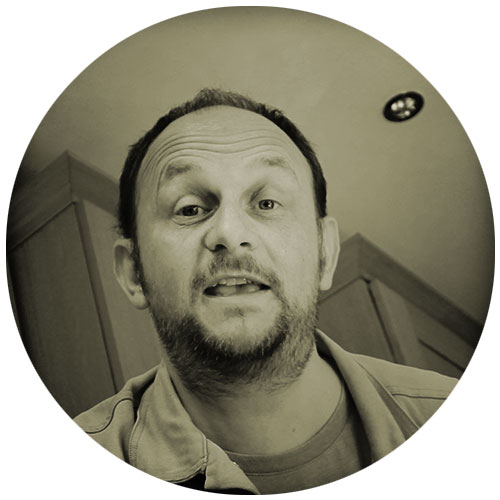 Nick Lane is a writer and director. He’s also pretty good at Hoovering. He has directed all of Rich Seam’s previous work, and will shortly be coming out of retirement as an actor to appear in the company’s forthcoming production ODD JOB MEN. For the majority of his career he has been most closely associated with Hull Truck Theatre Company, first as an actor, then as a writer and director, and, from 2006-2014, as the company’s Associate Director and Literary Manager.  He was grateful to work with and alongside his close friend (and long time Artistic Director of Hull Truck) John Godber for the majority of this time, as well as former Artistic Director Gareth Tudor Price.

His original adult plays include: THE DERBY McQUEEN AFFAIR (York Theatre Royal), MY FAVOURITE SUMMER (Hull Truck), BLUE CROSS XMAS (Hull Truck), ME & ME DAD (Hull Truck), HOUSEBOUND (Reform), SECONDS OUT (Reform) and ROYAL FLUSH (Rich Seam). His adaptations for adults includes: FRANKENSTEIN (Hull Truck), MOBY DICK (Hull Truck; co-adapted with John Godber), LADY CHATTERLEY’S LOVER (Hull Truck), 1984 (Hull Truck/York Theatre Royal/Northern Broadsides) and THE STRANGE CASE OF DR. JEKYLL & MR. HYDE (Hull Truck/Theatre Mill). He is also an accomplished children’s playwright, having successfully written and (for the most part) directed the Hull Truck Christmas shows from 2000-2011 and again in 2013. The children’s adaptations include: A CHRISTMAS CAROL, BEAUTY & THE BEAST, THE HUNCHBACK OF NOTRE DAME, THE SNOW QUEEN and PINOCCHIO (Hull Truck); SNOW WHITE, LITTLE RED RIDING HOOD and THE ELVES & THE SHOEMAKER (York Theatre Royal); HANSEL & GRETEL (Pilot). His original children’s work includes: TWAS THE NIGHT BEFORE CHRISTMAS, WHEN SANTA GOT STUCK IN THE FRIDGE, SCROOGE 2: THE TWELVE DAYS OF CHRISTMAS and A CHRISTMAS FAIRYTALE (Hull Truck); GINGER JONES & THE SULTAN’S EYE (Playhouse Project in association with Polka Theatre, York Theatre Royal and Drum Theatre Plymouth); THE KIT BASKET & OTHER STORIES (Gifted & Talented). Nick has directed the majority of his own work. Other plays Nick has directed include: THE GLASS MENAGERIE, SEPTEMBER IN THE RAIN, LITTLE ITALY, TWO, DEPARTURES, FAIR PLAY, BEEF and APRIL IN PARIS. Outside of writing and directing, Nick loves watching football (particularly – when he can stand the heartache – Doncaster Rovers) and reading new writing. Want to send him something? Drop him a line (nick@richseamtheatre.co.uk).

Matt Booth is an actor. He’s also not bad at washing cars. He has performed in all of Rich Seam’s work and is looking forward to the company’s new production ODD JOB MEN. Matt started his career with Northern Broadsides at the age of 20 after writing a blunt letter to Barrie Rutter asking for a job. An audition followed and Matt joined the cast of ROMEO & JULIET and went on to work with the company from 1995 – 2001

His work includes: ANTONY & CLEOPATRA, THE PASSION, RICHARD III, THE TRACKERS OF OXYRYNCHUS, THE MYSTERIES, SAMSON AGONISTES, THE MERRY WIVES, KING JOHN and MACBETH. He has also worked extensively with Hull Truck since 2004, being a regular performer in much of John Godber’s work including: SEASONS IN THE SUN, BOUNCERS, TEECHERS, UP ‘N’ UNDER, WRESTLING MAD, UNLEASHED, CHRISTMAS CRACKERS, OUR HOUSE and BEEF. Matt also performed in Nick Lane’s plays at Hull Truck: MY FAVOURITE SUMMER, ME & ME DAD and THE ELVES & THE SHOEMAKER. Other theatre work: OUT OF THE BLUE (YWT), SCORE (Bolton Octogon), THICK AS THIEVES, MY FAVOURITE SUMMER, GOD’S OFFICIAL, STUDS (Reform Theatre), LOST & FOUND, LAST TRAIN TO SCARBOROUGH (Stephen Joseph Theatre), HAPPY JACK (Wakefield Theatre Royal), ENGLAND ARISE! (Bent Architect). If you have any questions, comments or just want to get in touch with Rich Seam let Matt know: (matt@richseamtheatre.co.uk)

Give Us A Call.
Ask for Nick, Matt or Gemma